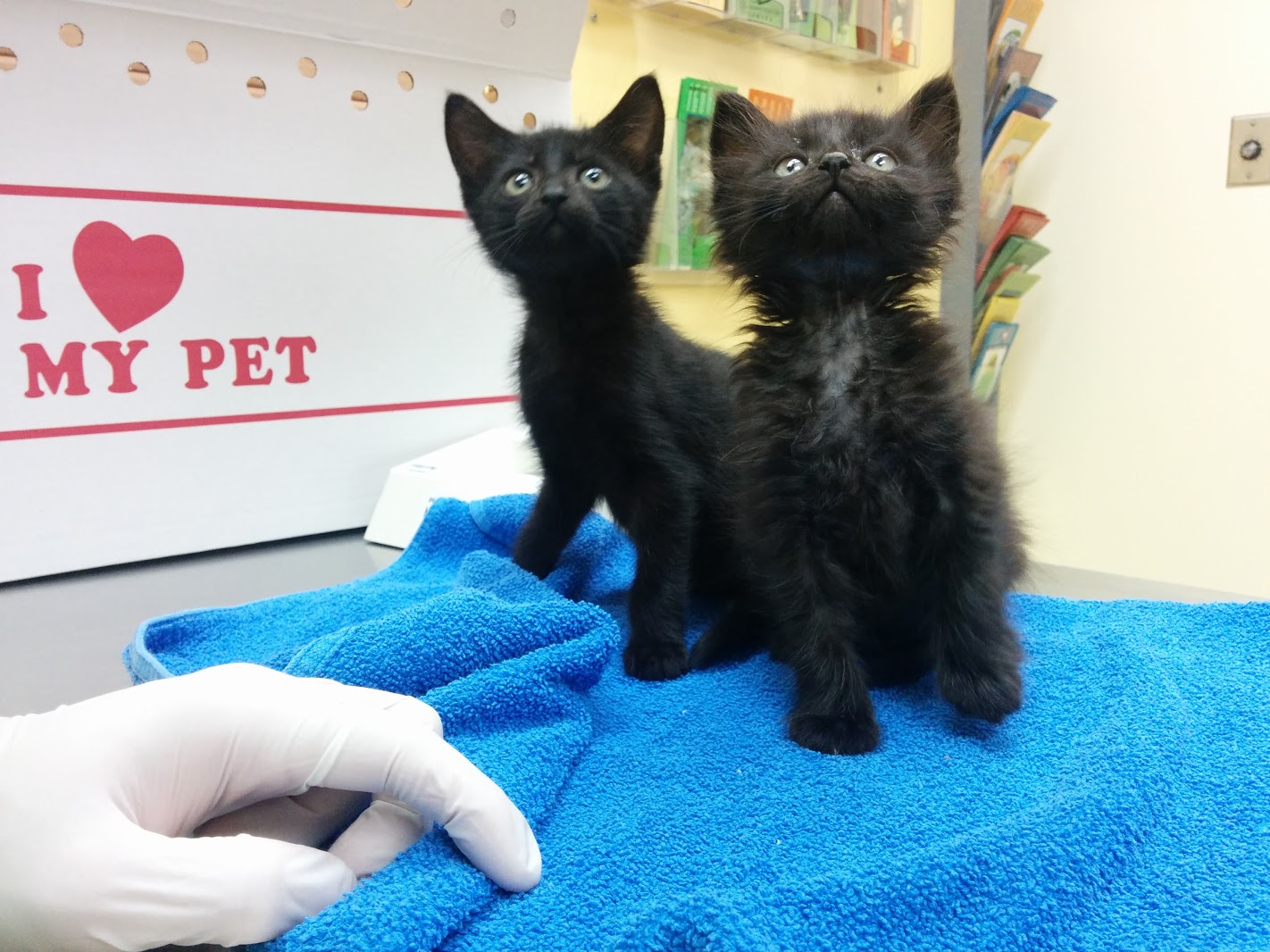 Black mewmews at the vet. Ringworm was evident with the balding chest area on the fuzzy kitten and minor hair loss on the face and crusts above the nose. July 31, 2016.

My first foray into fostering kittens in August 2016 was through Save a Kitten (SAK), a campaign by San Jose Animal Advocates in partnership with the City of San Jose Animal Care and Services (SJACS). During kitten season (approximately April to October), kittens that need around-the-clock care are often at high risk of euthanasia. Kittens at risk that need to be fostered usually have medical or behavior issues such as antisocial behavior, fur loss, eating disorders, eye discharge, upper respiratory infections, and bottle-feeding.

To join the program, I filled out a foster application form and messaged the SAK Facebook page to let them know that I was interested. The volunteer that mans the Facebook chat is super responsive and often responds within minutes. She quickly let me of a few kittens that fit within my criteria of no bottle-feeding and eating well. The same day, I ended up picking up two black kittens from the shelter in San Jose with some fur loss. 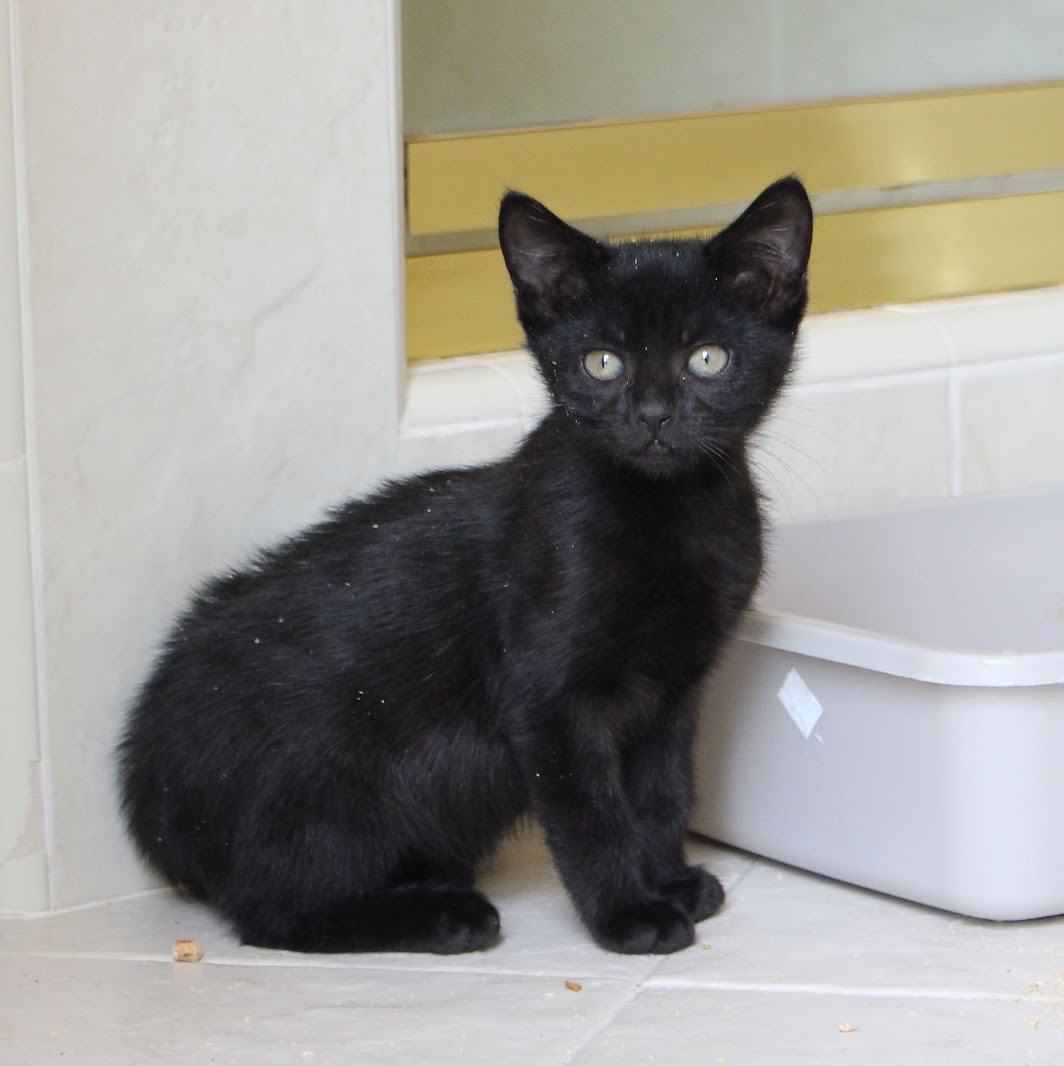 Mew #1 posing by the litter box. The whitish specks are the wood pellet litter dust. August 10, 2016.

After taking them to a vet appointment the next day, they were diagnosed with ringworm, and I was given instructions to keep them carefully quarantined, since ringworm is very contagious and zoonotic, and to give them weekly lime sulfur dip baths.

After reading many articles about ringworm, since I was paranoid about transferring it to my other household bunnies and cat, my boyfriend and I ended up with a good routine that has proven to have kept the fungus out of the rest of my zoo a month later. We placed the kittens in a bathroom that was segregated from the rest of the house by another room that we closed access to. Every five days, we gave the kittens a lime sulfur dip and thoroughly bleached the bathroom. Before putting the kittens in the bathroom, I removed all towels, toothbrushes, and any other materials that were fabric and porous. We used disposable bowls and plates for their wet and dry food, and used a small plastic litterbox and ceramic water dish that we thoroughly cleaned when we gave the kittens their bath. Every time we handled or interacted with the kittens, we wore nitrile gloves and bleached any skin surfaces that may have come in contact with the kittens upon leaving. 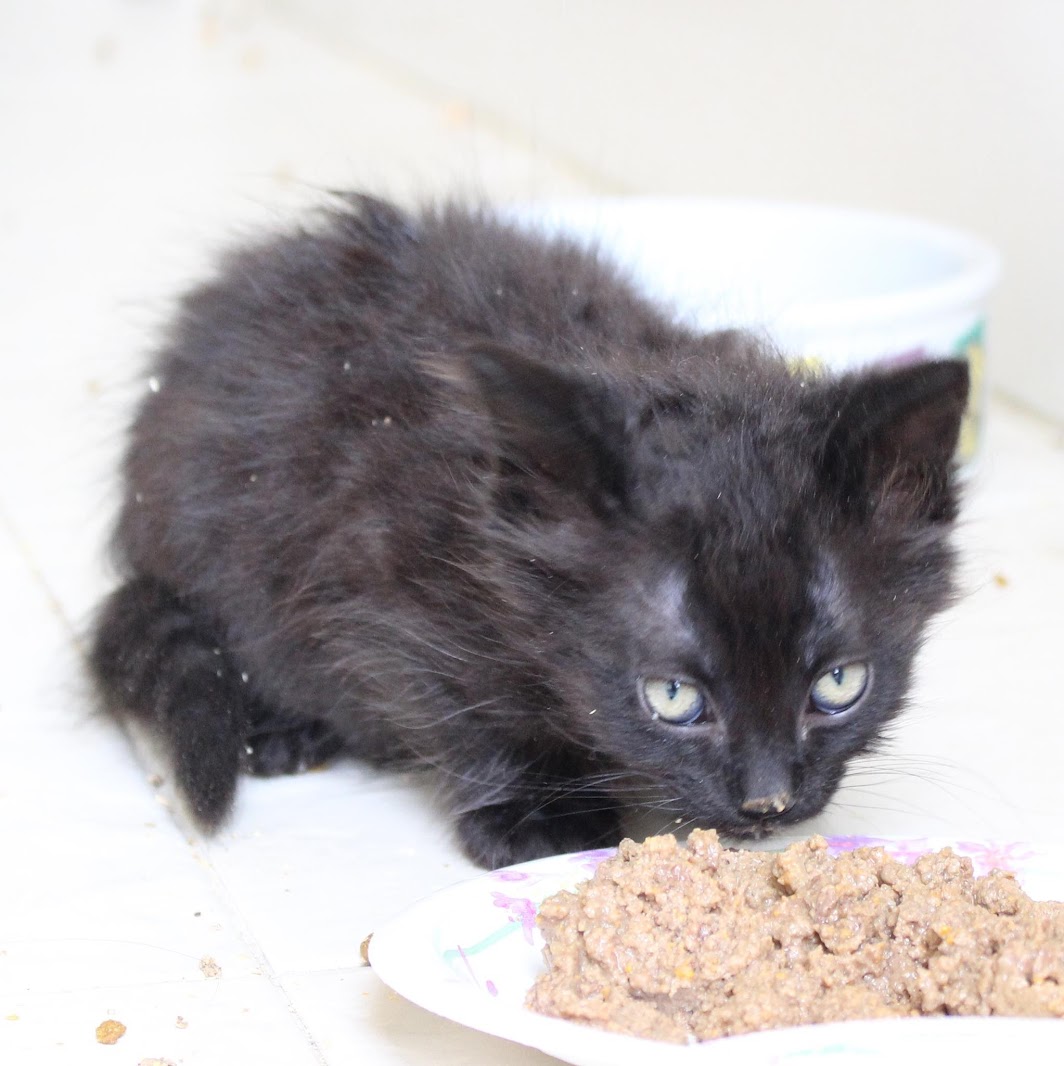 Mewtwo eating his favorite wet food. The whitish specks are the wood pellet litter dust. You can see some crusty ringworm lesion under the wet food on his nose. August 10, 2016.

The following are a few tips that have proven useful during our care of the kittens with ringworm.

All these tips proved effective in curing the kittens of ringworm in about a month as well as keeping the rest of my five bunnies and cat from catching the fungal disease. I picked up this first set of fosters on July 30, 2016, and returned them to the shelter on Aug 28, 2016 — cured and healthy! Hope this post helps other cat owners that have had to deal with ringworm in their house!