I first posted this on reddit, but I decided it would be a good re-post for the blog. 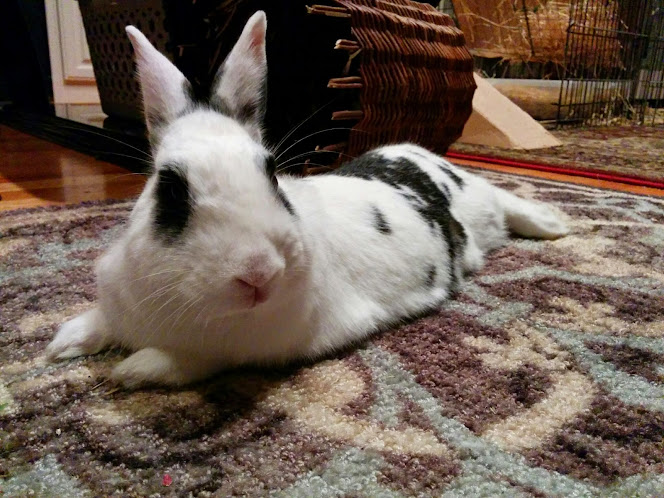 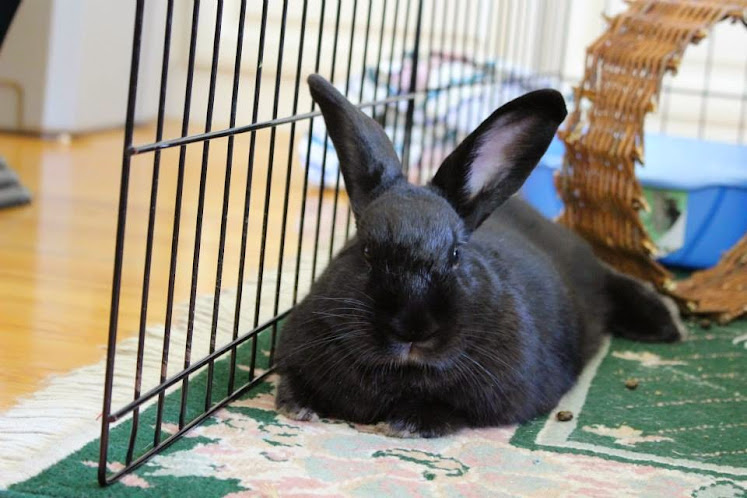 Had #1 for around 2-3 months before I decided to get another bun. Went to the county shelter for some speed dates, and decided on #2. She was grooming #1 at the shelter and was a super cuddly bunny in general. Picture of them next to each other on their bunny date.

Stuck them both in the same carrier and took them home. Bao Bao and Luna together in the carrier.

Bunnies seemed rather calm in the carrier and weren’t fighting. Unwisely, I let the door open into the living room, and they ended up getting in a fight under the coffee table. Reaction was to cage the new one up in the #1’s cage while #1 got to roam around. Finally set up a cardboard box barrier in the kitchen as a temporary enclosure to keep them housed separately. A couple days later, got an x-pen and put the two housing enclosures next to each other. Started swapping the litter boxes between the two pens and let them out one at a time. Poop EVERYWHERE. Chin city as well. What one bunny marked on his roaming time, the other bunny would mark when it was his turn. Ended up wiping everything they chinned down with vinegar to try to stop it. Sort of helped, I think. Also had a stuffed animal inside each enclosure with the other’s scent on it to watch if they ever groomed it, which they did, eventually. The poop wars between the two bunnies.

Tried setting up a giant area in front of the pens for some supervised dating time, but since not a neutral area, it led to the bunnies chasing and fighting under the coffee table, again. Got a water spray bottle to try to get #1 to stop nipping #2, but failed miserably. He got soaking wet and didn’t stop chasing at all.

Tried stress bonding where we drove around in the car or shook them in the carrier then placed them in the bathtub. #2 couldn’t care less and hopped all over #1 while he was just traumatized. When #1 recovered, he usually just started nipping and trying to chase #2. Eventually, it was impossible to keep them in the same carrier without fighting, so we gave that up.

Once, we also took the bunnies to a friend’s place to try some neutral location bonding before they stopped getting along in the same carrier. When both bunnies stopped being nervous about the location, #1 started endlessly chasing #2 to the point #2 actually screamed. D: That was horrible. Definite end to the party there. We see a definite hierarchy though.

After a couple weeks of swapping litter boxes and only letting one out at a time to exercise, the pooping was decreasing around the enclosures. Decided to try feeding veggies together. They ate together peacefully, and once one wandered into an enclosure (usually the other’s), I immediately closed the door on them. Fed them vegetables together.

Tried to keep all the experiences good and didn’t give them the opportunity to fight. Chin marking and pooping and peeing not in the litter box commenced, not that they weren’t doing it already before. Progress! We see the bunnies lay next to each other with only the cage bars between them. Before this, we’d often see #1 try to nip #2 through the bars both when #2 came around the enclosure when she was exploring and when #2 was in her cage and he was free. Bao Bao and Luna lying on either side of the fence.

A roommate moves out and leaves an empty room. NEUTRAL TERRITORY BONDING COMMENCE. We had one giant litter box with hay and a dish of water in case either of the bunnies wanted to eat, pee, or drink. We saw a lot of nipping and chasing from #1 as expected, but since the room was so big, it was easy for #2 to get away. Boyfriend and I would intervene when chasing went on for too long. We noticed it looked like #2 would run when #1 would nip her butt in a poor attempt to groom. #1 would get mad or something and start chasing. #1 would also nip her if she didn’t groom him when he demanded. lol.

Did this for 4 days, I believe. Started with 30 minutes and consequent sessions were 1+ hours. Each time, we saw more and more ignoring and eventually even more and more grooming from #1 to #2. Boyfriend opened the door and went outside to get something on the 4th day, and both bunnies escaped out the door into their previous war zone. Nothing happened. 😀 The bunnies ignoring each other.

After that, we just let them be out together in the apt but still be in separate cages for a couple of days. When there was absolutely no more fighting and even grooming from #1 for #2, we knew we were done. Both bunnies moved into the same pen. Sorry for the long story, but hope it was interesting and might help give you ideas on what to try for yourself. As a note, I never saw any humping going on with my rabbits and still don’t. All I saw were two fights under the coffee table where in one, #2 actually hung on to #1’s lip before she fell off when we grabbed #1. And then lots and lots of chasing and nipping from #1. #2 never did anything aggressive other than those initial two fights under the coffee table. Snuggling under said coffee table after they bonded.

tl;dr: 2nd bunny groomed 1st bunny on their first date but still took a month to fully bond, mainly due to lack of neutral territory and inefficiency of stress bonding.